We are thrilled to be heading to The Forum in Melbourne on September 17th 2022 supporting The Whitlams as they celebrate 25 years of their ARIA award-winning album, Eternal Nightcap.

We'll be opening proceedings with our own ARIA award-nominated classic album, Sweeter Than The Radio. It's set to be a massive night! Get in quick as tickets are selling fast! 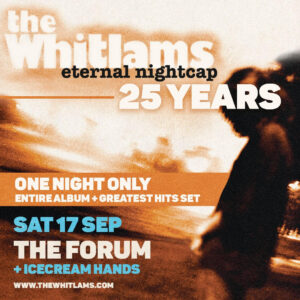 Formed in 1992, they have proven to be master craftsmen with a knack for delivering harmony drenched, classic guitar-driven melodic rock.  Stalwarts of the Australian music scene, they have six albums under their belt along with two ARIA nominations. Read more about Icecream Hands